“This world is but a canvas to our imagination.” Henry David Thoreau

It was the first day of February when I interviewed the very intelligent and talented Shadrach Burton whose (also known as Shadi of Wotten Waven.) He Sat cogently at the Loft Art and Cafe, a tranquil setting rooted on 18th Victoria Street, one of the places he displays his paintings. He was generous to take a few minutes out of his busy schedule of helping with some community work to speak to me. I hadn’t encountered the vastness of his unique and outstanding personality and it doesn’t hit me till we sit at one of the cafe’s wooden tables and the interview commences. The walls are decked with his amazing abstract paintings and I’m interested in learning his world.

Shardrach Burton was raised into a talented family, his father being an artist (a tee-shirt artist) his brother Gharan Burton and older sister being artists as well; it was no surprise that Shadi was inspired to become an artist himself, though that inspiration came mainly from his older sister who was a huge artist then. The gift was sort of inherited and he recalls many persons also speaking it over his life as they handed him crayons and other drawing materials growing up. He started painting at the early age of eight while in elementary school where he drew in class for his class mates, works for school projects that left both teachers and students amazed. 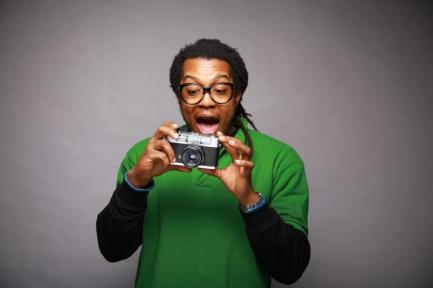 Shardrach attended the Dominica Grammar School where art was not taught at the time and so he found himself pursuing Sciences, for his curious mind always had him in awe and wonder and he was always keen on creation.  Shadrach love for the arts had him always painting at home or in school growing more and more in love with the world of art, his favorite artists being local artist Earl Etienne, other artists such as Christian George, Salvador Daly, Jean- Mitchel Basquict, Vincent Van Gough and Damien Hirst.  With his passion brewing on his insides he decided to attend China Academy of Art in the year 2007 where he studied art for eight years. At university he acquired an in-depth knowledge of the arts falling deeper in love with it while he studied various methods of art he was also  learning the Chinese language. 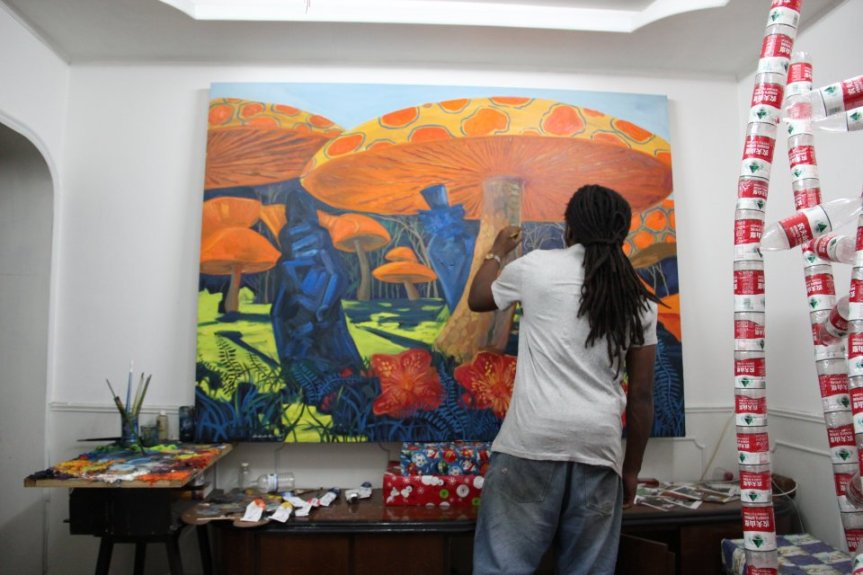 He jokingly tells me how you state simple phrases in the Chinese language and all I recall is ni –Hao” which means hello.  His work also made him a guest on some Chinese TV shows and he was such a great guest that they invited him back but this time as a host, he smiles as he tells how he enjoyed hosting.

Shadrach inspirations stems from everything from pictures, dreams,nature,music ,contemporary topics and pop culture’s all  spur his creative juices.

One of his greatest and best works is one which he spent four months working on using pounds of black paint, he calls it the black maze, a depict image of the pollution found in China.

Shadrach runs his hands through his locks as he smiles and describes the best part of being an artist, he states it  is seeing the world differently and creating things that persons view differently. His work being mainly acrylics, abstract and realism, he has developed a signature of his own in his paintings, they come in the form of never ending lines almost like a finger print found in his art representing his belief that all things are connected.

Though the artist at times feel restricted in what he wants done, especially when it come s to materials, he feels his work can be too massive for the materials he can actually acquire, but he remains optimistic that with the help of others anything is attainable.

Shadrach the artist ends the interview giving a word to aspiring artist to be sure of what they want to be in life and go hard for it, go out and chase your dream if not you won’t catch it, be true to yourself and confident in your work.

The artist can be contacted via Facebook on the link below.

She was almost a year into the job and many of her colleagues had abandoned the job already and moved on to pastures that seemed greener to them. She was going on months without a job and this one came when she needed it the most and as grateful as she was for the job she couldn’t help feeling stuck in a rut. She sat at her cubicle as her co-workers walked in and began complaining about the day and how much they hated their jobs. She stared blankly at the monitor and began feeling a bit out of place.
She was a 26 year old talented writer who had sort of taken a break from writing,as her work didn’t seem to sell as quickly as she would hope. So,she gave in to finding work in the cooperate world and no matter how much she tried to settle the universe always had ways of reminding her not to.
She sat there and before long she took a piece of paper and pen drafted this down as a reminder that where ever you are in life is a preparation for the next level of your life,being at this job had taught her a few things.

*Never Settle
*Believe in yourself
*Dare to dream
*If you’re uncomfortable where you are,it’s time to move
*Always get an opportunity to give,share
*Chase your dreams,for if you don’t how are you going to catch it
*Be grateful, but if you can do more go for it
*Always verify information,before going ahead with something
*Be confident,sound confident
*Never Settle